I received a phone call from my friend Glen this morning who was too impatient to wait for the blog update of how the 'Dishwasher Lasagna' turned out as he was going to make it today. So once again here I go cooking where very few have cooked before.

I made up the Lasagna according to the instructions and it looked yummy! I carefully triple wrapped it in foil and placed it in my dishwasher - and discovered a problem. There was no way to fit the packet between the tines of the bottom rack. Careful examination of the pictures with the recipe printout led me to believe I could just rest the packet on the tines. Oh if only I had Internet at my apartment to do a more careful check! I proceeded anyway and when I opened the dishwasher to check how cooking was going, this was the sight that met my eyes. The power of the jets had caused the packet to move against the tines and the tips had drilled a hole through the foil packet leaving me with a very clean soggy lasagna and this in my dishwasher! That is a very tasty mix of freshly chopped Spinach and Ricotta Cheese clogging my dishwasher drainage area!!!

Undeterred I devised a plan - after all I was hungry and this was my scheduled lunch for the day! I drained the lasagna packet of excess fluid, put it in a Pyrex dish, added some fresh cheese and put it in the oven for 15 mins at 350C Careful examination of the Wiki how instructions show that the dishwasher used had collapsible tines so that the packet would fit on the bottom rack horizontally. 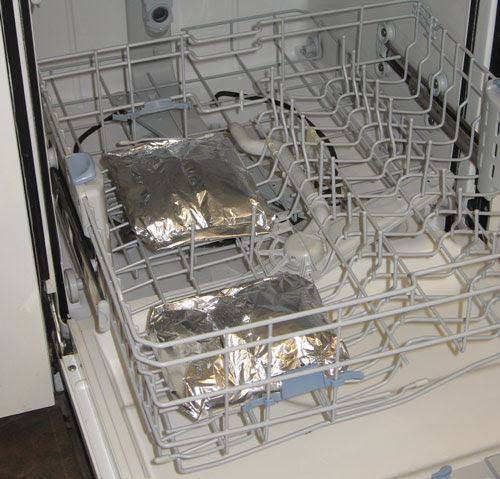 So my efforts in dishwasher cooking were foiled by my old fashioned dishwasher.
I've added a tip to the wiki how site suggesting that if your tines don't fold down like mine that you lay the packet in a dishwasher safe dish to prevent my disaster. Hopefully my friend Glen will do just that and let me know how it goes.

In other cooking news I made the Christmas Pudding. See this post for details and history of this most decadent dessert.

I carefully soaked all the fruits overnight in brandy - this is one boozy dessert. And carefully wrapped it, and steamed it for 3 1/2 hours! The aroma in the apartment was awesome! Now it will sit in the bottom of my refrigerator (even though it would survive fine in the pantry) until Christmas Day where it will be steamed for at least another 2 hours and then be consumed with Brandy Butter!!!

It was quite a cooking day - and I also did 6 hours of Defensive Driving, watched 2 movies ('Adaptation' and 'Singing in the Rain') and an episode of 'Lost'!!!

Posted by choral_composer at 3:37 PM

Peter, I was really pleased you were going to actually try this recipe before me. If nothing else, I figured I could back out if you had ended up killing your dishwasher!

Per your recommendations, I wrapped my lasagna in foil, then put it inside an oven bag. The whole thing then went into a 9x13 baking dish. My dishwasher's tines don't fold flat either, but the baking dish sat perfectly into the space vacated by the utensil holder-thingy.

The oven bag was invaluable. Some of my ricotta managed to escape, but the lasagna stayed dry and perfect thanks to the seal provided by the oven bag.

I also picked up a few tips, such as:
* It's best to position the lasagna on the foil in a way that actually allows you to fold the foil! I ended up having to use extra foil, which inhibited the heat getting to the lasagna. (I put it in the oven for 20 minutes after it came out of the dishwasher.)

* Note that the recipe calls for "oven-ready" lasagna. I got the "raw" variety, and thus had to go to extra effort.

* By the time I got to the top layer, my pasta was pretty dry. I'd suggest keeping the pasta damp and/or adding some extra cheese on top.

All in all though, I ended up with a very edible meal! Thanks for all your consultation :)

I need to find my "how to cook under the hood of your car" Cookbook.....

Another thought: I recently picked up one Banquet's "Dinner in a Box" meals. (I realize such a thing is contempible for accomplished chefs like yourself, but they're lifesavers for busy cheapskates like me!)

My daughter asked me what it was, and when I told it was lasagna, she asked if I was going to cook it in the dishwasher. :)