One of my favourite Psalms is 131.

I'm preparing to lead staff worship tomorrow morning, so I sat with the Psalm and paraphrased it to use in the worship time.

This is what I came up with.


Today, I am content with who I am
I am not looking down on others to make me feel o.k.
I am not imagining great schemes or far reaching plans.
I have told my soul to be still,
I am as peaceful as a baby resting in its mother’s arms
My soul is nestled in God like that babe.

People of God; put your hope in Him.
Hope in Him forever.

Posted by choral_composer at 7:49 AM 2 comments:

One Hour to Help Save the Planet

Sketch Comedy from My Past

This sketch always makes me laugh every time I see it.

I've been to this restaurant!

Posted by choral_composer at 2:19 PM No comments:

Poem of the Day

I Can See The Floor 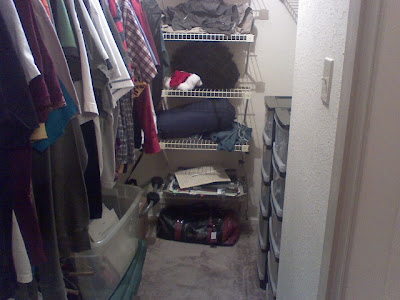 I gave away half my clothing to a Charity Shop this weekend and did a ton of cleaning and sorting - this is probably the first time in years you can walk in the door of my closet and make it to the back shelves without having to step over something!!!
Posted by choral_composer at 4:30 PM 2 comments:

Email ThisBlogThis!Share to TwitterShare to FacebookShare to Pinterest
Labels: Diary

Every Good Friday for the past 4 years I have laid out a Prayer Labyrinth for use on Holy Saturday. Here are some pics of this years endeavor.

When laying out a Labyrinth it's always good to eat a hearty breakfast before hand. This one was provided by Gini. Thanks - it was yummy! We began by laying marker dots all over the carpet, enough to mark out 12 concentric circles all 18 inches apart. Once they were all stuck down we began to connect them with masking tape. It's quite rough on the back and the knees. If you're not careful when crawling around the dots stick all over you. We've nearly marked out all 12 circles - that's the easy part. Next, mark out the 4 quadrants. Then you very carefully remove certain pieces of tape and add a few others, and voila!!! One Prayer Labyrinth ready to go. Mentally it's quite exhausting to coordinate - and yes we did check it to make sure nobody will get lost in it.

Thanks to everyone who volunteered their time to make it happen.

Posted by choral_composer at 2:26 PM 3 comments:

Announcing the Death of Jesus of Nazareth - Aged 33

Died: 14th day of the month Nisan in Jerusalem.

Preceded in death by Jacob bar Joseph who raised him as his own son.

Survived by his mother, Mary; brothers James, Joses and Judas, and his sisters.

Jesus of Nazareth was born in Bethlehem of Judea.

His family fled to Egypt when he was two, seeking political asylum.

They returned to Nazareth in Galilee after the death of Herod the Great.

Jesus was apprenticed as a carpenter to Joseph, and worked in the family business until he turned 30.

He was baptized in the Jordan River by his cousin John.

He spent the next 3 years living as an itinerant rabbi, with a small school of 12 disciples.

He devoted his life to serving the least, the last and the lost, wherever he found them.

Despite repeated warnings, his teaching, his work and those he chose to call "friend" drew unwanted attention from the authorities.

The family wish to make it clear that his arrest and immediate trial took place without due process. The charges of blasphemy and of being a threat to national security were not corroborated by a single witness.

He died as he lived: extending forgiveness to those responsible for his execution.

He will be greatly missed by his family, his friends-"the sinners" and by the poor.

The family extends gratitude to Joseph of Arimathea for covering the funeral expenses.
Posted by choral_composer at 2:18 PM 1 comment:

Every Day a Little Death

The title refers to Sondheim song that resonates with me when I'm feeling low.

(In it's original incarnation it is two women singing about how relationships die gradually over time. This is not one of my favorite renditions of the song but it was available on YouTube.)

I remember when I first heard this song, I had the Original British Cast Album of 'A Little Night Music' and I played this track over and over - I was a melodramatic 20 something (yes I know, I'm still melodramatic GRIN). Well whenever something happens that causes a little hope in me to die this song seems to float into the back of my mind.

Back in November I wrote about a Christmas Anthem that the choir here loved that everyone was telling me I should send off to the Publishers......read about that here

Well today I got a rejection letter:

Thank you for giving us the opportunity to review your choral arrangement Come See The Mystery. At our recent editorial session our editors had the privilege of review your manuscripts and although they are well done it appears that we won't be able to include them in our future publishing program.

We are sorry we could not be more encouraging. If you would like your manuscripts returned please supply me with your complete address.


Oh well - this is Holy Week, every little death brings me closer to a little Resurrection.
Posted by choral_composer at 2:42 PM 2 comments:

I made Falafel last night for the first time - though I pan fried them rather than deep fried them to be healthy - I've also heard of baking them in the oven too! I used a mix of Pinto Beans, crushed tortilla chips, green onions, egg white, cilantro, basil and cumin. 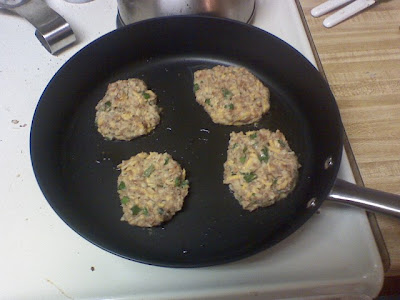 Here I have just added it to the hot skillet. 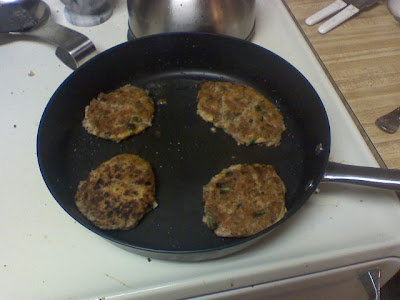 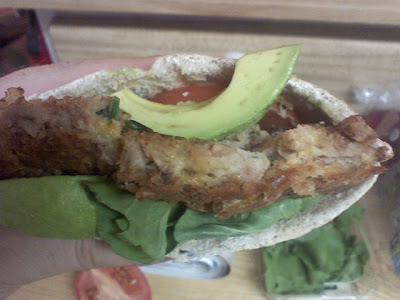 Posted by choral_composer at 4:04 PM 2 comments:

I've been introduced to Scrabulous this weekend. It's basically a Scrabble game that you can play over Facebook. I've never been very good at Scrabble so it's quite frustrating.
It reminded me of this vidlit story - enjoy.

Posted by choral_composer at 1:36 PM No comments:

The Gifts of Uncertainty (part 1)

(This is a transcription of an old Blog from my previous site. In the past few weeks I've been contemplating writing a sequel, so I thought I would post the original text here.)

I've been thinking a lot the last few days about truth and uncertainty. I recently read a blog online where the writer was defending his right to his opinion on a subject by saying that what he was writing was the 'truth' and if you were offended by hearing the truth it wasn't his fault.

I saw echoes of my former self in his words. I can truly say that there are lots of things of which I used to be 100% right where now I have embraced the gift of uncertainty.

Truth is a difficult thing. We are taught at an early age that 2+2=4. We get a check mark for a correct answer and a cross for anything else. The problem is that truth isn't actually that exclusive. Consider the following:

For some of you it may appear that I have totally flipped at this moment, but bear with me. I would argue that all 3 equations are correct; you just need to look at them through a different paradigm.

(For those of you who are not math geeks just do some research on wikipedia)
All 3 equations are different and equally valid ways of expressing the 'truth' of 2+2=4.

Many of my former issues where I was convinced I was correct and everyone else could 'either agree with me or be wrong' are like this example. I couldn't agree with that persons answer because I didn't know the paradigm they were coming from. I've since discovered the danger of saying 'You can't possibly call yourself a Christian and believe ________________' (fill in the blank with whatever topic you want). Could it be that you can? Could it be that the other persons Christianity is just a different and equally valid way of expressing the truth that God loves us and longs for us to live for Him (or her)?

Jesus frequently exploded people's paradigms – he redefined the term 'Mother and Brothers' from a biological relationship to one of obedience (Luke 8: 19-21). He expanded the term 'Neighbor' from geographical to relational (Luke 10: 25-37) and he said the way to judge someone was not on their words but on how those words produce fruit in their lives (Matt 7: 15-19)

I once exasperated a friend by pointing out to him that for everyone who agreed with him I could find someone with far more years of study on the topic who would disagree. In frustration he threw up his hands and said 'Well how can you know anything??!'.

Maybe that is one of the gifts of uncertainty – humility.

If I am 100% convinced that I am right and you are wrong then there is a barrier between us. I don't have to be right all the time anymore. As I have become aware of my identity in God I have been able to surrender some of my need to have a narrow dogmatic definition of truth. I've heard it said that whenever we draw a line in the sand and say who is in and who is out, or who is right and who is wrong, that God steps over the line to be with the very people we have excluded.

Certainty erects barriers, but another gift of uncertainty is community.

Another gift of uncertainty is the gift of introspection. I'm slowly learning to ask myself why. Why do I believe this way? Why do I want to reject people who believe differently? What is it about me that needs the certainty?

Richard Rohr writes in 'Everything Belongs'

'There is a small "I" that has to let go so that the true "I" can be born…….The small "I" only knows itself by comparison, by image, by how we look. As long as we are comparing and differentiating from the other, we can't love the other. We judge it. As soon as we are in a judging mode (higher/lower, superior/inferior), we can't love. The small "I" does not permit a realm of freedom where love flourishes. What flourishes is control, comparison, and competition – which blind us to love.'

It tends to be the people who have a strict/judgmental image of God who are the most strict and judgmental in themselves – we become like the God we worship.
I guess that's why I'm escaping Fundamentalism and enjoying life, I'm discovering a God of delight, or surprises, of joy. A God who is deeply and passionately in love with me and delights in my uncertainty, because another gift of uncertainty is grace.

The Art Of Cheese

For some reason this commercial was deemed too 'Controversial' to air during the Superbowl.

I think it's hilarious :)

Posted by choral_composer at 9:18 AM No comments:

I hate the time change, losing the hour is always far more draining than it should be....so here's a solution!

Why doesn't the entire world just adjust the time by 30 minutes, and LEAVE IT THERE?

That way everyone would be happy.

A Moment of Mitch

So, I haven't had time to blog much recently, but I want my loyal readers (all 3 of you) to keep coming back, so here's a clip of one of my favorite comedians.

The Important things about the election (Plus the Results!)


Poll: Bullshit Is Most Important Issue For 2008 Voters


Diebold Accidentally Leaks Results Of 2008 Election Early
Posted by choral_composer at 11:36 AM No comments: