In a world where following Christ is decreed to be a subversive and illegal activity you have been accused of being a believer, arrested, and dragged before a court.

You have been under clandestine surveillance for some time now, and so the prosecution has been able to build up quite a case against you. They begin the trail by offering the judge dozens of photographs that show you attending church meetings, speaking at religious events, and participating in various prayer and worship services. After this, they present a selection of items that have been confiscated from your home: religious books that you own, worship CDs, and other Christian artifacts. Then they step up the pace by displaying many of the poems, pieces of prose, and journal entries that you had lovingly written concerning your faith. Finally, in closing, the prosecution offers your Bible to the judge. This is a well-worn book with scribbles, notes, drawings, and underlinings throughout, evidence, if it were needed, that you had read and reread this sacred text many times.

Throughout the case you have been sitting silently in fear and trembling. You know deep in your heart that with the large body of evidence that has been amassed by the prosecution you face the possibility of a long imprisonment or even execution. At various times throughout the proceedings you have lost all confidence and have been on the verge of standing up and denying Christ. But while this thought has plagued your mind throughout the trial, you resist the temptation and remain focused.

Once the prosecution has finished presenting their case the judge proceeds to ask if you have anything to add, but you remain silent and resolute, terrified that if you open your mouth, even for a moment, you might deny the charges made against you. Like Christ, you remain silent before your accusers. In response you are led outside to wait as the judge ponders your case.

The hours pass slowly as you sit under guard in the foyer waiting to be summoned back. Eventually a young man in uniform appears and leads you into the courtroom so that you may hear the verdict and receive word of your punishment. Once you have been seated in the dock the judge, a harsh and unyielding man, enters the room, stands before you, looks deep into your eyes and begins to speak.

"Of the charges that have been brought forward I find the accused not guilty."

"Not guilty?" your heart freezes. Then, in a split second, the fear and terror that had moments before threatened to strip your resolve are swallowed up by confusion and rage.

Despite the surroundings, you stand defiantly before the judge and demand that he give an account concerning why you are innocent of the charges in light of the evidence.

"What evidence?" he replies back in shock.

"What about the poems and prose that I wrote?" you reply.

"They simply show that you think of yourself as a poet, nothing more."

"But what about the services I spoke at, the times I wept in church and the long, sleepless nights of prayer?"

"Evidence that you are a good speaker and actor, nothing more," replied the judge. "It is obvious that you deluded those around you, and perhaps at times you even deluded yourself, but this foolishness is not enough to convict you in a court of law."

"But this is madness!" you shout. "It would seem that no evidence would convict you!"

"Not so," replies the judge as if informing you of a great, long-forgotten secret.

"The court is indifferent toward your Bible reading and church attendance; it has no concerns for worship with words and a pen. Continue to develop your theology, and use it to paints pictures of love. We have no interest in such armchair artists who spend their time creating images of a better world. We exist only for those who would lay down that brush, and their life, in a Christ-like endeavor to create a better world. So, until you live as Christ and his followers did, until you challenge this system and become a thorn in our side, until you die to yourself and offer your body to the flames, until then, my friend, you are no enemy of ours."

The Orthodox Heretic - Peter Rollins
Posted by choral_composer at 1:19 PM No comments:

O.k. first off I should say that I didn't make this with fennel. I tried three stores and they were all out, which is sad because I love the taste of fennel bulb. I had an orange bell pepper in the fridge that was fast approaching its usefullness date, so I just adapted. Feel free to us what you want, but I urge you to give fennel a try as it is so yummy.

Preheat oven to 450F
Heat a large nonstick skillet over medium-high heat. Add sausage to pan (removed from it's skins) and saute for 4 minutes or until browned. Remove from pan.

Place pizza crust on baking sheet. Top evenly with onion mixture, sprinkle with cheese, and top evenly with sausage. Bake at 450F for 12 minutes or until cheese melts. (I used a thin crust boboli and it was done quicker).

Sprinkle evenly with the chives and serve. 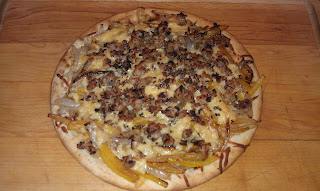 (originally from Cooking Light)
Posted by choral_composer at 4:50 PM No comments:

Email ThisBlogThis!Share to TwitterShare to FacebookShare to Pinterest
Labels: recipes

Arrange fish in a single layer in a shallow roasting pan coated with cooking spray. Combine orange juice through next 9 ingredients (through garlic); pour over fish and let stand for 15 minutes.

Sprinkle fish with paprika; broil for 15 minutes of until desired degree of doneness. Drizzle sauce over fish.


I served this with a simple salad of peppers and onions sauted in olive oil. Then I wilted some spinach into the pan and added a sprinkle of pecan chips :) 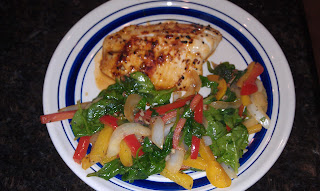 Email ThisBlogThis!Share to TwitterShare to FacebookShare to Pinterest
Labels: recipes

Catching up with Ourselves.

An American traveler planned a long safari to Africa. He was a compulsive man, loaded down with maps, timetables, and agendas. Men had been engaged from a local tribe to carry the cumbersome load of supplies, luggage and “essential stuff.”

On the fourth morning, the tribesmen refused to move. They simply sat by a tree. The American became incensed.

“This is a waste of valuable time. Can someone tell me what is going on here?”

The translator answered, “They are waiting for their souls to catch up with their bodies.”


Reflect back over your past week.

• When did you feel like you were ‘loaded down with maps, timetables and agendas’?

• When did you feel frustrated?
• Do you feel connected to your ‘soul’ at the moment?
Posted by choral_composer at 5:49 PM No comments:

How big is your field?

Then Jesus said, "God's kingdom is like seed thrown on a field by a man who then goes to bed and forgets about it. The seed sprouts and grows—he has no idea how it happens. The earth does it all without his help: first a green stem of grass, then a bud, then the ripened grain. When the grain is fully formed, he reaps—harvest time!

In our discussion this week someone made a comment about where the seed in the parable is sown. The whole world is God's field. There is not a person or situation that God is not working in at some subterranean level.

When this statement was made I could offer intellectual assent, but I could feel a push back emotionally. There are people, organizations, situations that I really cannot see the work of God in. I find it difficult to imagine God seed being planted in such fields that I label poisonous.

I found some resistance that I'm still having to work through.

My first challenge is that if I take the message of this parable seriously, then I have to let go of many of my judgements around people. I cannot divide the world into good and bad, right and wrong. I cannot discount people I would label fanatic or lunatic because God is at work in that person. If God in his infinite love and grace chooses to pour out his love on somebody, who am I to see that person as somehow less? The same Jesus who loves me, loves them.

But I don't want to change. It's exhausting. It's confusing. It's so much easier for me keep putting my labels on people, organizations and situations, the alternative is overwhelming. A few months ago I wrote this:

"I saw the world in black and white.

When that didn't work I moved to shades of grey,
Now I see even that is too monochromatic.
There is a world of color that I was terrified to let into my checkerboard existence,
And now my eyes have adjusted I cannot go back to that stifling false dichotomy."

And now I discover that I still have adjustments to be made.

Something that is helping me in this is the realization that there is a difference between God working 'in' someone's life and God working 'through' someone's life. Many people and organizations perform actions that seem to run counter to my understanding of the work of God. I think about Westboro Baptist Church planning on picketing Steve Jobs funeral for example. It's difficult for me to imagine God working through that demonstration. However I need to realize that God is still working in the lives of everyone. It's difficult, but I need to learn to not judge the outside of someone, and instead trust that God is indeed working in that person in a way I cannot see.

That is so hard.

To love the unlovable, to extend grace to the graceless....

...and just maybe, God uses my act of extending love instead of judgement to till the soil of my own life and plant new seeds within me.

"If you judge people, you have no time to love them" ~ Mother Theresa
Posted by choral_composer at 1:34 PM No comments:

The Custodian
Sometimes I think I have lived
My whole life like that old janitor
Who locked up after the rabbi
And patrolled the synagogue at night.

He never learned the Hebrew prayers,
Which he hummed under his breath
As he folded the soiled tallises
And stacked the skullcaps into piles.

He opened the Holy Ark by hand
And dusted off the sacred scrolls
O Lord, which he never opened,
And cut the light behind the organ.

He ignored the Eternal Lamp
(Woe to the worker who unplugged it!),
As he vacuumed the House of Prayer
Muddied by the congregation.

Not for him the heavenly choir music
Or the bearded sermon handed down
From the lectern, through stars squinted
Through the stained-glass windows.

Every now and then he'd sigh
And stare up at the domed ceiling
As is he had heard something auspicious
But it was only the wind in the trees.

He picked up a prayer book off the floor
And carried it down to the basement,
Where he chewed on a sandwich
And listened to a ballgame on the radio.

~ Edward Hirsch
Posted by choral_composer at 4:20 PM No comments: