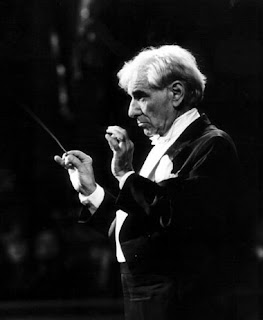 I've spent much of my life playing violin in orchestras, and every piece starts the same way, with silence. There is a moment before the music begins when the orchestra (and the audience hopefully) are totally still, quiet and attentive. Everyone is focused on the conductor, waiting for that gesture that signals tempo, volume and mood. Waiting for the beat that signifies that it is time to play.

If the pause before the music does not take place then the music is diminished before it begins. If the musicians do not watch the conductor then the beginning is ragged and the music suffers.

In the Liturgy of the Hours the work for the day is prayed for and distributed at Prime. This act of prayer means that all work is entered into mindfully, no rushing into the task. First look at the tasks that need to be accomplished. Listen to them and listen to your own interior moods about them. When work is approached this way with attentiveness, then it becomes our servant rather than our master.  Every action we make, every task we accomplish can become a prayer.


There's a rush in the kitchen, there's monks in the hall
It's past time for dinner, they're silent monks all
The cook is a good man with ladle and plate
He will not be rushed in the steam and the heat

Though a simple man, he just seemed to know
As it is above, so it is below

He hums to himself all the hymns he has known
While he pulls up the leeks, they're so carefully grown
He doesn't like chapel bent down on his knees
Just wasting his time with these words and decrees.

Though a simple man, he just seemed to know
As it is above, so it is below

Though a simple man, he just seemed to know
As it is above, so it is below
Posted by choral_composer at 2:21 PM No comments:

Dancing in the dark

I once visited a cave in the North of England where they took us deep underground and then turned off the lights. The guide told us that the darkness was such that our eyes would never adjust no matter how long we waited. When he did turn the lights back on he did so gradually. Normal light would have been blinding to our eyes.

The Psalmist says '...even the darkness will not be dark to you; the night will shine like the day, for darkness is as light to you.' (Psalm 139:12)

There is no darkness in our lives that our 'eyes' cannot adjust too. Waiting in the dark is never fruitless because the darkness is as light. I find that comforting because it gives me something constructive to do in the darkness. Instead of cursing it I can pray that my eyes adjust to the 'darkness that is as light.' in the light of that darkness who knows what I may see and learn. Instead of just waiting for the light I can gaze into the darkness for signs of God's handiwork.....and maybe, maybe I can dance.

Suppose you're traveling to work and you see a stop sign. What do you do? That depends on how you exegete the stop sign.

1. A postmodernist deconstructs the sign (knocks it over with his car), ending forever the tyranny of the north-south traffic over the east-west traffic.

2. Similarly, a Marxist sees a stop sign as an instrument of class conflict. He concludes that the bourgeoisie use the north-south road and obstruct the progress of the workers on the east-west road.

4. An average Catholic (or Orthodox or Coptic or Anglican or Methodist or Presbyterian or whatever) doesn't bother to read the sign but he'll stop if the car in front of him does.

5. A fundamentalist, taking the text very literally, stops at the stop sign and waits for it to tell him to go.

6. A preacher might look up "STOP" in his lexicons of English and discover that it can mean: 1) something which prevents motion, such as a plug for a drain, or a block of wood that prevents a door from closing; 2) a location where a train or bus lets off passengers. The main point of his sermon the following Sunday on this text is: when you see a stop sign, it is a place where traffic is naturally clogged, so it is a good place to let off passengers from your car.

7. An orthodox Jew does one of two things:
1) Take another route to work that doesn't have a stop sign so that he doesn't run the risk of disobeying the Law.
2) Stop at the stop sign, say "Blessed art thou, O Lord our God, king of the universe, who hast given us thy commandment to stop," wait 3 seconds according to his watch, and then proceed.
Incidentally, the Talmud has the following comments on this passage: R[abbi] Meir says: He who does not stop shall not live long. R. Hillel says: Cursed is he who does not count to three before proceeding. R. Simon ben Yudah says: Why three? Because the Holy One, blessed be He, gave us the Law, the Prophets, and the Writings. R. ben Isaac says: Because of the three patriarchs. R. Yehuda says: Why bless the Lord at a stop sign? Because it says: "Be still, and know that I am God." R. Hezekiel says: When Jephthah returned from defeating the Ammonites, the Holy One, blessed be He, knew that a donkey would run out of the house and overtake his daughter; but Jephthah did not stop at the stop sign, and the donkey did not have time to come out. For this reason he saw his daughter first and lost her. Thus he was judged for his transgression at the stop sign. R. Gamaliel says: R. Hillel, when he was a baby, never spoke a word, though his parents tried to teach him by speaking and showing him the words on a scroll. One day his father was driving through town and did not stop at the sign. Young Hillel called out: "Stop, father!" In this way, he began reading and speaking at the same time. Thus it is written: "Out of the mouth of babes." R. ben Jacob says: Where did the stop sign come from? Out of the sky, for it is written: "Forever, O Lord, your word is fixed in the heavens." R. ben Nathan says: When were stop signs created? On the fourth day, for it is written: "let them serve as signs." R. Yeshuah says: ... [continues for three more pages]

8. A Pharisee does the same thing as an orthodox Jew, except that he waits 10 seconds instead of 3. He also replaces his brake lights with 1000 watt searchlights and connects his horn so that it is activated whenever he touches the brake pedal.

9. A scholar from Jesus seminar concludes that the passage "STOP" undoubtedly was never uttered by Jesus himself, but belongs entirely to stage III of the gospel tradition, when the church was first confronted by traffic in its parking lot.

10. A NT scholar notices that there is no stop sign on Mark street but there is one on Matthew and Luke streets, and concludes that the ones on Luke and Matthew streets are both copied from a sign on a completely hypothetical street called "Q". There is an excellent 300 page discussion of speculations on the origin of these stop signs and the differences between the stop signs on Matthew and Luke street in the scholar's commentary on the passage. There is an unfortunately omission in the commentary, however; the author apparently forgot to explain what the text means.

11. An OT scholar points out that there are a number of stylistic differences between the first and second half of the passage "STOP". For example, "ST" contains no enclosed areas and 5 line endings, whereas "OP" contains two enclosed areas and only one line termination. He concludes that the author for the second part is different from the author for the first part and probably lived hundreds of years later. Later scholars determine that the second half is itself actually written by two separate authors because of similar stylistic differences between the "O" and the "P".

12. Another prominent OT scholar notes in his commentary that the stop sign would fit better into the context three streets back. (Unfortunately, he neglected to explain why in his commentary.) Clearly it was moved to its present location by a later redactor. He thus exegetes the intersection as though the stop sign were not there.

13. Because of the difficulties in interpretation, another OT scholar emends the text, changing "T" to "H". "SHOP" is much easier to understand in context than "STOP" because of the multiplicity of stores in the area. The textual corruption probably occurred because "SHOP" is so similar to "STOP" on the sign several streets back that it is a natural mistake for a scribe to make. Thus the sign should be interpreted to announce the existence of a shopping area.

14. A "prophetic" preacher notices that the square root of the sum of the numeric representations of the letters S-T-O-P (sigma-tau-omicron-pi in the Greek alphabet), multiplied by 40 (the number of testing), and divided by four (the number of the world--north, south, east, and west), equals 666. Therefore, he concludes that stop signs are the dreaded "mark of the beast," a harbinger of divine judgment upon the world, and must be avoided at all costs.