Too far, too fast, too soon

I've been losing weight. For over a year now I've been working out every morning at the gym. I never expected to be the kind of person who rises before the sun and goes to meet his personal trainer....and enjoy it!!!

But, as many of you know...I'm down 55lbs and 8 inches off my waist line. To keep me motivated I've set little goals for myself. The first was to win the gym weight loss competition, the next to get to 40lbs gone...then 50....for the fall I decided to sign up for a 5K. I haven't been doing much running but I've been doing a lot of other cardio, and during the race I signed up for you get pelted with powder paint at the end of each kilometer, fun!!!!

Because I had the stamina to make it through a Body Combat class and a Sh'bam class back to back I figured running wouldn't be to bad, and so on July 20th I jumped on the treadmill to give running a try. Here is what I wrote that day on facebook.


Last summer before I joined the gym, I tried doing the Couch Potato to 5K training program in an attempt to lose some weight. I had zero motivation and could never run more than 90 seconds without having to stop and walk again.

Today I did a test run on the treadmill to help me to decide whether to sign up for a 5K in November. I managed:

Holy cow! I never would have imagined I could run for 24 minutes without stopping. I am totally signing up and beginning to train for the 5K now!!!

Because I was able to run so far I started doing Couch Potato to 5k again....and started at week 4.

The pain went away :)

By the end of week 2 my legs were so excruciating I could barely make it up the stairs.

I tried neuromuscular massage, I tried kt tape (which involved shaving my legs!!!) and eventually I went to see a Specialist.

Xrays were taken confirming shin splints, but apparently you can get stress fractures in bones that do not appear on xrays...and so other scans were ordered. 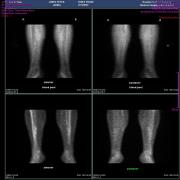 And so last week, I willingly had radioactive material injected into my body and laid motionless under a special camera. Scans of my legs were taken and then my entire body was analyzed.

It was all rather fascinating really. Despite my asthma and my ability to catch almost every cold that is circulating I've actually had good health. I've never busted any bones and I have been hospitalized only once for nasal polyps when I was in High School. 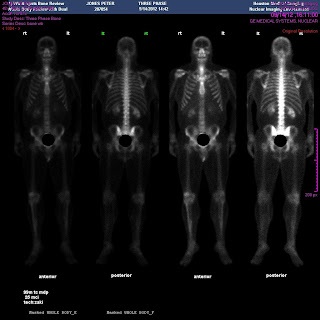 Today I went to see the specialist to get my results. (Actually due to having intelligent friends on facebook I already knew the diagnosis, I just didn't know the treatment).

I have tibial stress fractures on both legs, the right leg being worse than the left. I also have shin splints in both legs and an arthritis stress reaction in my right knee.


Here is what the Doctor has ordered. 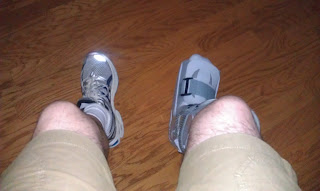 I'm not sure how long I have to wear this velcro clad torture device. My next appointment is in three weeks :(

The Apostle Paul wrote "Everything is permissible, but not everything is beneficial" - 1 Corinthians 10:23

I've been drawn to this verse recently. I've written before about Christians and their lists of Rights and Wrongs but I have wondered what to replace those lists with.

I think Paul's statement here is a partial answer.

At first glance saying 'Everything is permissible' sounds like a license to do whatever I want, but action must be viewed through the lens of 'Is this beneficial?'

Running the distance that I did was certainly permissible, but it was not beneficial to my overall health. I wonder how different I would be if I stopped and asked the question 'Is this beneficial?' to every action I take?

Rather than look at Right and Wrong and listen to Christians debate what falls into each category I will attempt to use Paul's writing as a measure.

Questions to ponder while I heal from something that was permissible but definitely not beneficial to my tibias!
Posted by choral_composer at 5:27 PM 1 comment:

The Ballad of 2nd Clarinet

For those of you looking for the story I read in the Contemplative Service this morning, the original post can be found here
Posted by choral_composer at 8:07 AM No comments:

Having a good day? 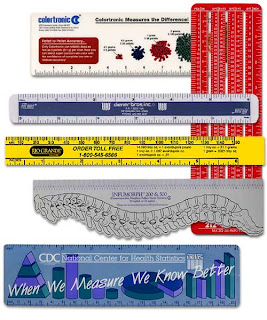 Have I had a good day?

I'm not as interested in the answer to that question as in how I formulate my answer. What criteria do I use to judge whether a day is good or bad? How do I measure a day, what 'rulers' do I use. A few possible answers.

Have I had any meaningful conversations with anyone today?

Have I spent any time being creative?

Have I avoided negative emotions/experiences and maximized positive ones?

Did I feel connected with God today?

There are just some of my rulers, and unfortunately they are often in conflict with one another. I need time alone to be creative, but if I maximize that alone time then I avoid meaningful conversations with other people. The act of creativity can sometimes feel negative for me, some works of art have very painful births. If creativity leads me to encounter negative emotions I would rather avoid then not being creative makes it a good day. I've had times when my encounter with the Divine has left me feeling empty and convicted rather than full and peaceful.

I've used many different rulers over the years. In high school a good day was measured by what classes I had scheduled or whether I successfully avoided the school bullies. Some rulers have been discarded while others have become their exact opposites. A good day in high school used to be one where I didn't have to go to P.E. Now, a good day is one where I make it to the gym.

Every ruler that I use reduces the item being measured to less than its totality. A meal can be measured by Taste, Texture, Appearance, Aroma and Nutrition. For years I avoided bananas solely because of their texture, it was only this year when I finally peeled and consumed my first one, and now I eat at least one a day. For decades I missed the bananas' benefits because I only evaluated them on texture.

Every day we are bombarded with an over abundance of experiences and emotions. Measuring and categorizing helps us order them and prevents us from being overwhelmed. Measuring also minimizes and distances ourselves from our own lives, it is difficult to evaluate and experience at the same time.

Some of my bad days in retrospect are some of my best.

Posted by choral_composer at 7:38 AM No comments: