Random thoughts for the Contemplative Service
This is an adaptation of an earlier post, so if you read the first one, you can just ignore this one lol)

I don't remember when I first started praying, it was definitely before I had the 'evangelical conversion experience'. I used to address my prayers to God without any real understanding of who God was. After I became a christian (walk forward at a Revival during 'Just as I Am', say a three point prayer and get a little emotional) most of my prayers were addressed to Jesus.

In my twenties I went though a very charismatic phase so most of my prayers were addressed to the Holy Spirit (or just spirit if I felt informal).

I still start my prayers different ways at different times, but I became aware a few years ago that my default setting was 'Father God'.

The words we use are important, they indicate preferences and prejudices and also set up expectations. Different organizations use different terms to mean the same thing to cast themselves in the best possible light. 'Illegal Alien' vs 'Undocumented Worker' or 'Pro-life' vs 'Pro-choice'.

Each of these terms carry subtly different shades of meaning.

When you shop at Target or go to Disney World you are not a Customer (even though you are buying a product), you are a Guest.

Some of these language issues creep into church as well. I've been in meetings where the Congregation has accidentally been referred to as the Audience. It was just a slip of the tongue, but I wonder what mindset it revealed about the role of the people in the pews. When I was young most Pastors had a 'Study' at church. Now most of the Pastors I know have an 'Office' at church and do their studying elsewhere, usually somewhere where the audience (oops I mean congregation) can't find them :D

So what has this to do with my prayers?

I believe that God displays qualities that we traditionally label as masculine and others we label as feminine. Isaiah says 'As a mother comforts her child, so will I comfort you and you will be comforted over Jerusalem' (Isaiah 66:13)

I have no difficulty using the phrase in a prayer 'God, as a mother you....' but when I tried to use the phrase 'Mother God' it tripped on my tongue and I felt uncomfortable. Even though I gave intellectual assent to God mothering me as well as fathering me, it still felt strange.

And so I prayed that way, out loud for one week. I prayed to Mother God, mainly in the car or in my office, and I noticed something. The content of my prayers shifted slightly. When I was a child I would ask my Mother and Father the same question but I would phrase it differently. The way I would talk about a topic with my Dad was different to Mom, and so it was with my prayers. I was still praying about the same situations and topics, but the shift in language caused a shift in emphasis and sometimes even a shift in request.

All of our ways of describing God fall short of who God is. God is beyond gender, so much more than only Father or Mother.

When I changed the metaphor that I was using for God, my way of relating to God changed.

What metaphors do you use when you pray?

Well here are some of the pics of the Caribbean Cruise :)

Just to explain, we were the first ever ship to dock at Falmouth, Jamaica. The dock wasn't completely finished, but the entire town came to see us arrive and leave...it was quite amazing.

There are also some photos on a couple of waterproof cameras (climbing the waterfall in Jamaica, snorkelling etc) which I will post when I get them!

Posted by choral_composer at 8:58 PM No comments:

It started from a picture in my copy of Cooking for Two 2010 by America's Test Kitchen. A recipe for Rustic Turkey Tart taunted me. The main ingredient was 10oz of cooked turkey, shredded. Now I am more than happy to roast a turkey for major holidays, but I don't make it a weekly occurrence so my fridge is not laden down with Tupperware of turkey calling out to be used. 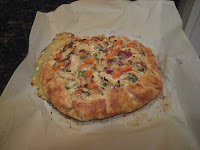 (This is my changed version, not Cook's Illustrated original)

So, seeing as I knew I was going to be substituting Chicken for Turkey, I wondered what other changes I could make to make the Tart my own. The original recipe called for mushrooms, now I am a big fan of fungi, but Jenny - the neighbor I am teaching to cook isn't. I wondered how I could transform the filling to make it pleasurable on Jenny's palate. Well, once you start changing recipes it's amazing how far you can go, so here is my new adaptation (with notes and queries below). If you make it, let me know how you like it!


You will also need, cooking parchment, saran wrap, a rolling pin and a rimmed baking sheet.

To make the filling: 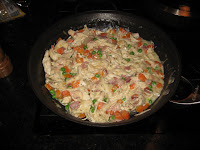 All of this can of course be done in advance and kept in the fridge.
To assemble the tart: 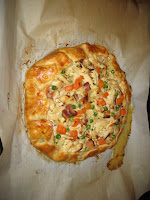 You'll notice a little seepage from the Tart, I don't think I've managed one yet without something leaking somewhere, but it hasn't distracted from the yumminess and the parchment paper makes it easy to clean. If you want to make a neater presentation it is simplicity itself to slide it off the parchment onto a platter. Just cut and serve! 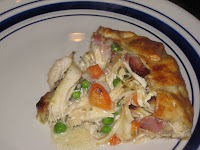 I'm happy with the recipe, but here are a few more thoughts to improve/modify.

Well that's my recipe. If you try it let me know what happens :)

Posted by choral_composer at 9:01 PM 2 comments:

Kingsburg - I got the expansion for Christmas so I had to re familiarize myself with the base game...somehow the expansion is still in shrink...must open it soon.

Rattus - because a game where you are trying to give other people the Black Plague while you are avoiding it yourself is always fun...actually it is a great little strategy game that doesn't outstay its welcome.

The Resistance - a group deduction game like Werewolf, but without player elimination. Lying never felt so good!

Revolution - although it's basically a glorified Rock Paper Scissors, the amount of double think and screwage that goes on with this game is enjoyable!

A couple of games of special note this month that only received a single play:

Through the Ages - I finally managed to play a full game of this, it took Steve and I 5 hours to complete, and it was a real nail biting finish that I only lost by 7 points. As this was my first full game and my first play in 8 months I felt good about how I acquitted myself :)

Glory To Rome - a popular game whose cartoony graphics seem at contrast to its depth. I'm glad I finally got to play this :)
Posted by choral_composer at 2:03 PM No comments:

Email ThisBlogThis!Share to TwitterShare to FacebookShare to Pinterest
Labels: board games

How NOT to have a cooking show!

Posted by choral_composer at 8:09 AM No comments: